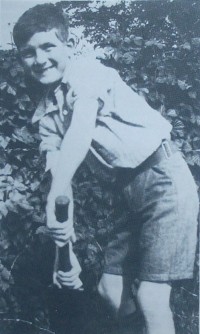 Ivor at the age of 9

For 40 years, from the time he joined as a 17 year old in 1934, Ivor Golby was an ever-present part of the Radlett first eleven. His correct method and unruffled temperament made him an effective opening bat, and his medium pace outswingers were always spot on a length. Year after year he took 100 wickets at low cost; 12 consecutive maidens against H.A.C. in 1966 were a typical example of his nagging accuracy.

In 1984, Charles Randall wrote in the centenary booklet:

Golby still playing it again — at 67

IVOR GOLBY, musician and sportsman, starts his 51st season as a playing member of Radlett this summer at the age of 67.

That moustache, which used to be jet-black and trim, now curls wildly outwards, flecked with eccentric autumn colours. The tall man’s loping gait is stiffer now, even though a titanium hip-joint has beaten arthritis. But the memories of an athletic life always remain. Nothing wrong then, with a bit of nostalgia – a few names, a few faces, a few places and a funny story or two.

The small boy, who played cricket with his brother Arthur in sun-drenched meadows which ringed the southern edge of the village, went on to play for Herts as a batsman and carve an astonishing career as a club bowler.

The nervous lad from Watford Grammar School made his Radlett debut in 1934 – against St Albans at Clarence Park – and kept his place in the team for neatly 40 years, a spell broken only by the war and service with the RAPC in Italy, North Africa and France.

The Club was so different in the early days out at Porters Park . . . mostly for the city gentlemen from the villas that were spaced out among the leafy hillsides … a few farmers … a few high ranks . . . immaculate accents, immaculate creams, less than immaculate fielding. The “boy from the village” was a good bat and could run about for them in the field.

The 60 not out against Lismore, Holt and Co at St Albans was a good start for young Golby. Later that season Golby took 100 not out off Bishop’s Stortford at Porters Park. At the age of 17 years and 7 months he was, and still is, the youngest player to have scored a century for the Club. And yet the war stole his best cricketing years. No Herts call-up until 1953—one of only four appearances— at the age of 36. “That’s one of my biggest regrets,” says Golby, even now.

But it is the mystique of the Golby seamers, off five paces, that fascinates. Was it the watch gleaming on the leading wrist? Was it the seam standing jagged and proud? Was it the long, lean fingers and hard fingernails?

Before 1950, his leg-breaks gathered dust, and the nets batsmen played back his neat seamers. Then one day Chris Dexter suggested to Bob Woodbridge, the captain: “Why not try Ivor?”

“Shorten your run,” advised Leslie King, the peerless Herts off-cutter bowler, a few seasons later. And a new era of late away-swing began. Maiden followed maiden like a dripping tap. Wickets came too. including 100 in a season at the age of 53.

Remember 1966 and 12 successive maidens opening [he bowling against the HAC at Cobden Hill? Or 1970, on a gloriously sunny day against Buckhurst Hill, who groped and scuffled against their tall, lean tormentor? They blocked the good balls and didn’t believe the bad ones. Figures: 39,5-26-58-6. Cheshunt had had their turn in 1965. hypnotised to the tune of 34.2-21-34-8.

There are so many memories for Ivor Vernon Golby, born in Kensal Rise on 7 December 1916, and brought as a baby to live in Radlett, where he has stayed ever since.

There is the sound of church music – and 60 years in the Christ Church choir . . . the click of snooker balls on the green beize—and men’s club champion dozens of times since 1943 . . . the piano and swelling voices on balmy matchday evenings in the cricket pavilion. Who can forget the trombone brilliance of Chris Smith and the energy of Jimmy Shields, the self-appointed unison conductor? When the selectors dropped Golby, they shot the piano player.

The chatter of children and echoing school halls, the music and games – all part of life until retirement day from Fairfield School six years ago.

Gentle collision of woods on the bowling green in a career spanning only three years—”I’m addicted to i( now,” says Radlett champion each year and probably this year, and probably next year.

Douglas Jardine, the old England captain and then still a fine batsman, moved to the top of Gill’s Hill after the war. “He bowled leg-breaks and apologised to me in the deep,” Golby recalls. Jardine died in the village aged 57 in 1958.

There was the beloved Leslie King, brilliant bowler and modest man. Berkhamsted were cruising to victory one day at Cobden Hill and half their side had changed. A hat-trick by King started the stampede and the last man, wearing a civvy shirt, was bowled first ball. “I’ve still got my reading glasses on,” the victim complained.

Enter Chris Dexter in 1947—unarmed combat on the field, all tweed and pipesmoke off it – to form a run-pinching opening partnership with Golby for a decade. Dexter, just over seven rnonths older than Golby, was reared on Staffordshire League cricket, and war service with the RAF ruined his ambition to break into professional cricket with Notts.

He’s still playing, of course … same blue cap, a pair of spectacles added. Those 20 minutes of physical training every morning for 40 years are paying dividends. At the age of 63 the pugnacious Dexter rattled up 113 not out for the second team at Leighton Buzzard when the selectors were trying to pension him off to the third team. Typical Dexter.

He still bowls those off-cutters and still remains one of cricket’s great harassers of his own fieldsmen. Breaking off his six-ball skirmish with the batsman, he still moves someone somewhere one or two feet somewhere else.

“I don’t like non-triers and lackadaisical players,” he insists, “and I don’t seek popularity.” Dexter, inevitably, has taken his place among the characters of the game. Now a playing vice-president, he has had a long, loyal and happy association with the club.

That is why Golby’s greatest catch—and there were many exceptional ones—remains a vivid picture . . . that sprint round the boundary and perfectly timed take, right in front of the Cobden Hill pavilion. The catcher was substituting for Stanmore and the victim was Dexter, who was flying through the eighties towards his century.

“He didn’t forgive me for weeks,” the chuckle grows louder at the memory. Ken Chapman, the Stanmore captain, made matters worse by conceding afterwards: “Nobody in our side would have been able to catch that.”

As seasons passed, the Golby-Dexter partnerships slid down the order. At Hitchin in 1969 the two veterans were the last pair, and Tom Austin, that great leg-spinner and googly merchant, had taken all nine. Dexter ran Golby out. “He called and I told him as we crossed he must be joking I was out by yards.”

The mystery still remains about the wisdom of his call, but one thing is certain, Austin had never taken 10 wickets in a match before then – and he never has since.

Few batsmen have ever hit Golby out of the attack, fewer than the pebbles in an umpire’s pocket. And Mike Brearley and Richie Benaud are among his most prized victims.

Geoff Dawson gave Golby a pasting, when with Letchworth before joining Radlett. And Archie Yates. of Rickmansworth, with that high back-lift, would always threaten to—next season. “I’ll get you, Ivor, you wait,” he would call on his way back to the pavilion. In 1971 Golby had him caught at mid-off for a duck and went on to take nine wickets. Archie never realised his ambition.

Cricketers by the battalion, of course, march past in Golby’s memory. Leslie Bateman was one, the Welwyn Garden City batsman, who was “so prolific it wasn’t true”; D. B. Carr and a lovely hundred against Radlett as a schoolboy; and among many of Radlett’s own are Victor Wild “up and over if the wind’s behind.” Ken Blackburn, the vicar, “always two to third man,” and Alan Brown, a batsman with beautiful style.

Golby had several years scoring 1,000 runs a season and then several taking 100 wickets. “Not many people can say they’ve done that, can they?” said Ol’ Golby to me recently, awaiting his turn at the snooker table. At Radlett, certainly, nobody ever has.

Nowadays it is third-team cricket, with the titanium hip-joint. The old line ‘n length formula still holds good, and the accuracy and concentration are still there. And the enjoyment. When the selectors next drop Golby, they will be doing more than just shooting the piano player. 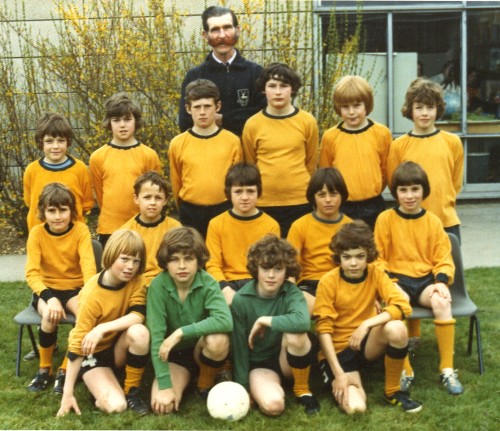 It’s been a bumper season for the 11-year-old footballers of Fair Field School, Radlett, who have won two trophies and were runners-up in the Wix Trophy.

The Wix competition is open to all schools in Herts, Beds and Luton District and Fair Field beat six teams to reach the final at the first attempt.

They were hoping to add that trophy to the Watford and District League and Bushey Area Six-a-side titles they had already won, also for the first time, but they went down 3-1 in last week’s final at Garston to Radburn School, Letchworth.

There was no score in an evenly-fought first half, when Peter Kiss and Richard Hart went close for the Radlett side. But Radburn, who also had chances before the interval, scored two quick goals in the second half and then had a third disallowed for offside.

After the presentation and a “bean feast” at the school. Fair Field’s, master-in-charge, Ivor Golby, took his players for their traditional post-match celebration.

“I’ve taken the boys down to the chip shop in the village after all the matches and I’m sure it’s been the key to our success!” he said. “It has cost me a fortune, but it’s been worthwhile.” 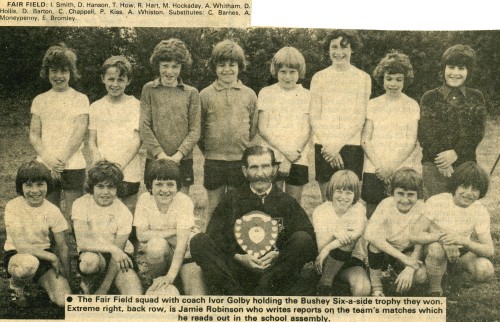 The Fair Field squad with coach Ivor Golby holding the Bushey Six-a-side trophy they won. Extreme right, back row, is Jamie Robinson who writes reports on the team’s matches which he reads out in the school assembly.