Carr played three seasons for Radlett in 1975-77 when he came to live in Aldenham Avenue. He was secretary of the Test and County Cricket Board at Lord’s and was already well known at the cricket club, having visited Cobden Hill regularly with Repton Pilgrims. He played golf at Porters Park.

During his distinguished career with Derbyshire he played two Tests for England in India — one as captain – the winter after graduating at Oxford. Radlett gained the benefit of his cheerful and thoughtful presence.

At a ripe age his reflexes at slip were still intact and his left-arm spin-bowling, in his youth a passport to the Derbyshire side, proved effective on several occasions. With the bat he judged length expertly. His placements, cutting and late dabbing allowed impressive fluency against the best bowling, though he did not achieve a century in his dozen or so games.

He was not often available, but in 1975 he was the key player in a remarkable match, mentioned in The Sun newspaper. Carr, with 65, rescued a morning collapse against Eastcote at Cobden Hill, gashing his face with a top-edged sweep in the process.

Eastcote’s strong batting side were cruising to victory when Carr instigated a collapse with his left-armers, finishing with 8-32. A bizarre feature was Arnie Hubbard’s unintentional declaration. He clapped his hands in annoyance at a tail-ender’s rash stroke and all the players walked off, assuming a closure. Hubbard said he was too embarrassed to send them back…

Carr’s move to the village benefited Radlett in another way. His son John grew up with the club as a colt and became a magnificent batsman for Radlett, Oxford University and Middlesex, once topping the national averages in 1994.

John Carr was unlucky. He was probably a better player than Donald, but never played for England. 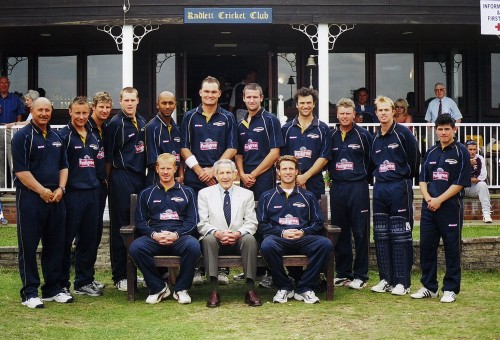